These artists declared that they had come together on the basis of a new awareness of their “collective singularity”. For all the diversity of their plastic language, they did indeed perceive a common basis for their work, this being a method of direct appropriation of reality, equivalent, in the terms used by Pierre Restany, to a “poetic recycling of urban, industrial and advertising reality”

Their group activity and the exhibitions they mounted together covered the period from 1962 to 1963, but the history of New Realism continued at least up until 1970, the year of the group’s tenth anniversary, which was marked by the organisation of large-scale events. 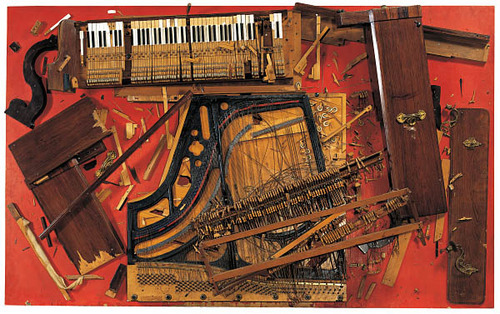 The term Nouveau Réalisme (New Realism) was forged by Pierre Restany during an early group exhibition in May 1960. By returning to “realism” as a category, he was referring to the 19th-century artistic and literary movement which aimed to describe ordinary everyday reality without any idealisation. Yet, this realism was “new”, in the sense that there was a Nouveau Roman in fiction and a New Wave in film: in the first place it connects itself to the new reality deriving from an urban consumer society, in the second place its descriptive mode is also new because it no longer is identified with a representation through the making of an appropriate image, but consists in the presentation of the object chosen by the artist. 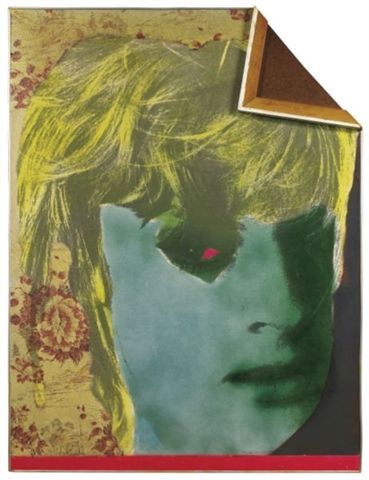 It is also thanks to Pierre Restany that Nouveau Realism was defended on the international scene in the face of an emerging American art form, Pop Art, and financially supported by a network of dealers and collectors.

In my view I feel the emotional context and personal connections within Nouveau Realism gives the movement a large shift in my opinion towards a much stronger artistic force against the more tacky and obvious cool that prevailed the the Pop art scenes of New York and London.

In 1955, The art critic Pierre Restany meets Yves Klein at the Club des Solitaires in Paris, where the artist’s first solo show has been put on. Klein is showing monochromes in different colours. He introduces Arman, a childhood friend, to Restany, then Hains and TinguelyIn 1958, At the Galerie Iris Clert, Yves Klein presents the Void exhibition no works are on show and the gallery’s white picture rails merely invite visitors to contemplate “the spatialisation of sensibility”.

The catalogue’s introduction is written by Pierre Restany. Arman’s Full exhibition in 1960 will be a response to this event: this time the Galerie Iris Clert will have its window filled with refuse.

In May 1960, at the Apollinaire gallery in Milan, Pierre Restany sets up the first group exhibition, bringing together Arman, Hains, Dufrêne, Yves Klein, Villeglé and Tinguely. On this occasion he composes a text introducing the catalogue with the title “Les Nouveaux Réalistes”; it is the first time this term appears in Restany’s writing.

His introduction to the catalogue, establishing a kinship between the New Realists and the non-art of Dada and Duchamp, is regarded as the second manifesto of the movement.

In July 1961, the First Festival of New Realism is held in Nice with a group exhibition, public action-spectacles and a recital of phonetic poems by Rotella.

In October 1962, following the death of Yves Klein, the Sidney Janis Gallery in New York puts on the exhibition The New Realists, in which the European New Realist artists are presented as the partial precursors of an artistic advance which flowers fully only with the Pop Art artists.

In 1963, In Munich, the Second Festival of New Realism takes place, in the course of which Christo joins the group. The introduction to the catalogue written by Pierre Restany, “Le Nouveau Réalisme? Que faut-il en penser?” (“New realism? What are we to make of it?”) is regarded as the third and final manifesto of the movement.

Who are key artists

Arman born Nice, France, 1928, Among the objects used by Arman, it is indisputably musical instruments that have given rise to the most frequent manipulations : rages, cutting up, accumulations, combustions, bronze castings and assemblages.

Cesar born Marseille, France, 1921, Emphasised “the discovery of industrial and urban nature”, and by placing these works within a world of technology. Through the choice of materials which form the load, their character, their colour and the knowledge of the process of compression, he was quickly able to predict the effects achieved by the machine and to reintroduce his own creative awareness into a seemingly impersonal mechanism 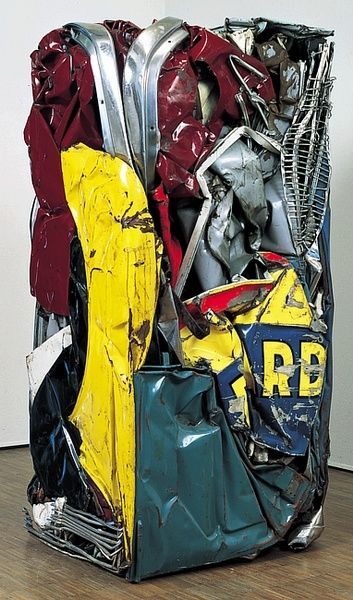 Yves Klein born Nice, France, 1928, Klein is considered an important figure in post-war European art. Also one of the leading members of  Nouveau realism  Klein was a pioneer in the development of performance art, and is seen as an inspiration to and as a forerunner of Minimal art, as well as Pop art.

“Blue has no dimension, it is outside dimension, while the other colours do have one. They are pre-psychological spaces. All the colours bring associations of concrete ideas, while blue at the most brings to mind the sea and the sky, what is anyway most abstract in tangible and visible nature”. Yves Klein quote 1960. 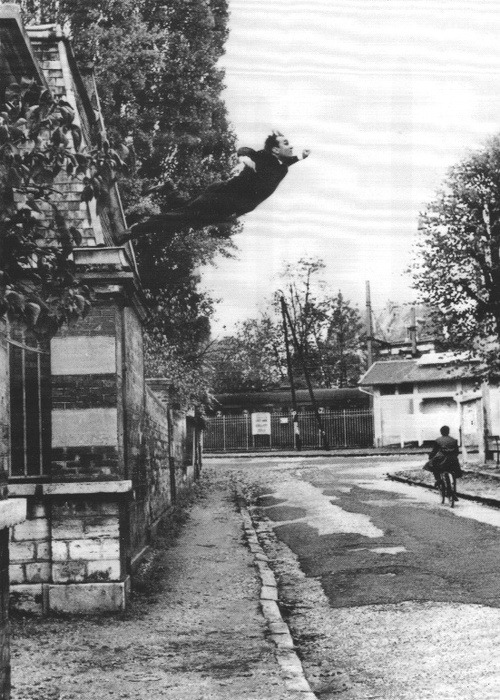 Martial Raysse born 1936 Golf-Juan, France, One of the most original and personally (along with Nikki de Saint Phalle) one of my favourites from the era, He was fascinated by the beauty of plastic, he plundered low-costs shops with plastic items and developed what became his “vision hygiene” concept; a vision that showcases consumer society.

In 1960, his Visual Hygiene series of household implements hung around a long-handled scrubbing brush, or sunscreen products and beach toys crowned by an advertising dummy, ushered into the realm of art “a world that is new, antiseptic and pure”, that of the supermarkets and advertising for the consumer society.

This reappropriation of objects that are supremely banal aligned him with the experiments of Arman, Spoerri and Tinguely, with whom he founded the New Realists group in 1960. Soon regarded as the young French artist who came closest to American Pop Art, between 1961 in 1966 Raysse participated in numerous artistic events throughout Europe and the United States.

After 1968, Raysse underwent a shift which led him to make a sudden break with the circuit of dealers and galleries, and to withdraw to the south of France. Within the community he formed with a number of friends, he made works using craft techniques, and subsequently returned to the most traditional modes of painting. 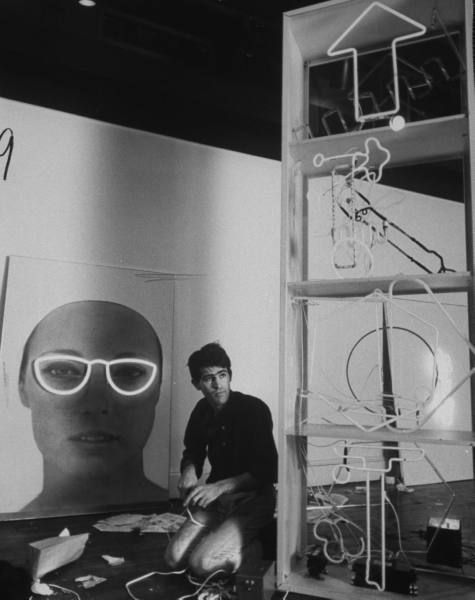 Niki De Saint-Phalle born 1930, Neuilly-sur-Seine, France, Niki de Saint Phalle spent her childhood in New York, only returning to Paris in 1951. At this point she was painting naive canvases akin to the style of art-brut, for the therapeutic purpose of overcoming serious psychological disturbances.

After meeting Jean Tinguely, she joined the New Realist group in 1961 and embarked upon work of quite a different character. She made objects in plaster on which pouches of paint were hung. The public were invited to shoot at them with rifles and the works were thereby coloured by virtue of the skill (or otherwise) of those shooting. The violence underlying this approach parodied that of Abstract Expressionism, in particular Pollock’s Action Painting.

At the same time, she began constructing human figures such as La Mariée or Crucifixion by assembling waste materials. By using everyday objects, she was working in the spirit of the New Realists, but her sensibility made her inclined to use these objects as the means to express a psychological reality repressed by social constraints. 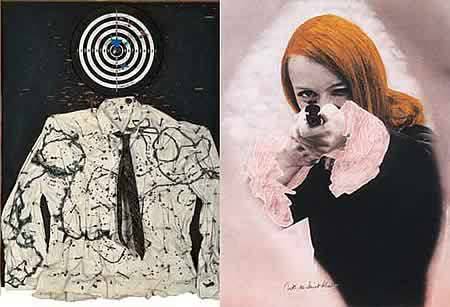 Shortly after the New Realist group was founded, Tinguely produced the Baluba series, in which he made use of all sorts of everyday objects, such as plastic toys, animal furs and scrap metal junk.

These works exist in an aesthetic atmosphere comparable with that of Spoerri’s Trap-pictures or Arman’s Dustbins. Tinguely makes them a kind of parody of classical sculpture, using industrial tin cans as plinths and carefully arranging the components, here topped with a feather duster as a head-dress.

But when spectators step on the control pedal and the sculpture is set in motion, they can watch a joyful celebration in which all of these suspended components are shaking in every direction. What seemed incomplete and unsatisfying when motionless, when animated becomes a bizarre enchantment of sorts.

While participating in the collective activities of the New Realists, Tinguely increasingly responded to commissions for public monuments. These can be seen, for example, in the Forest of Fontainebleau (The Cyclops), in Geneva or Basel, or else in Paris, where the Stravinsky Fountain was made in collaboration with his companion Niki Saint Phalle. 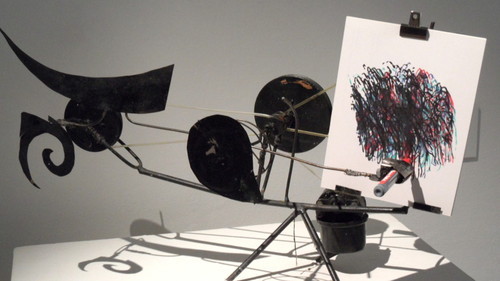 It is without doubt that this often overlooked movement in European 1960’s art should have dictated a higher influence on the art periods to come (like it's cousin; Pop Art!) though perhaps it’s the mystery that makes it so appealing to me.